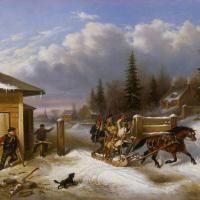 Originally trained in Holland and Germany, Krieghoff came to Canada via the United States in the 1840s. After a few years of vagrant living between Rochester, Toronto and Montreal, he settled in Quebec City. It is remarkable that from the very outset of his exposure to his adopted land, he commenced painting subject matter which was not only unique to his own times but has subsequently evolved to define Canadianism in the art of Canada. Initially, the artist was fascinated by the way of life both of the natives and the early European settlers and produced paintings which depicted day to day life of ordinary people. Usually these paintings are distinguished from the later works by tight handling and smaller scale. Rapidly his paintings caught the attention of art collectors and the demand for his work soon enabled him to earn his living as a full time artist. Gradually, with sustained adaptation to northern light, the artist expanded the scope of his subject matter to include landscape in different seasons of the year. Albeit somewhat repetitive, Krieghoff painted some of the most spectacular views of the Canadian Landscape ever painted in the 19th century. These included the mountains and rivers of Quebec in summer and winter. Of particular artistic rendition are his compositions of autumn which celebrate the unique harvest of colour. Indeed, the influence of his understanding of the splendor of colour in the northern light of winter and the autumn foliage influenced a generation of such great artists as Tom Thomson and Suzor-Coté. During the mid 1860s, Krieghoff started to exhibit his work both in Canada as well as in Europe. His lithographs, now rare were printed in England and won wide acclaim. During the years that followed, his vision became more daring as he undertook social events and subject matter that rivaled the vision of great old masters of Europe. Subjects such as Bilking the Toll Gate tell the story of the earliest days of transportation and urban living that gave rise to a system of rudimentary taxation to finance infrastructure in North America. Paintings such as Merry Making go even further as artistic testament to a collective way of life during the earliest days of European settlements in Canada. At the end of his life, Krieghoff moved to Chicago to be close to his only child, where he subsequently died in 1872. In a career which spanned less than two decades, the artist gifted Canada with a vision in art that has become renowned as the foundation for Canadian Art. A work by Krieghoff is not only a mark of prestige for any art collection, it is also a tribute to the struggles and hardships sustained by the earliest settlers who founded Canada. The sympathy and understanding with which Krieghoff portrayed his subject matter is his own tribute to a way of life and the people he discovered and celebrated.